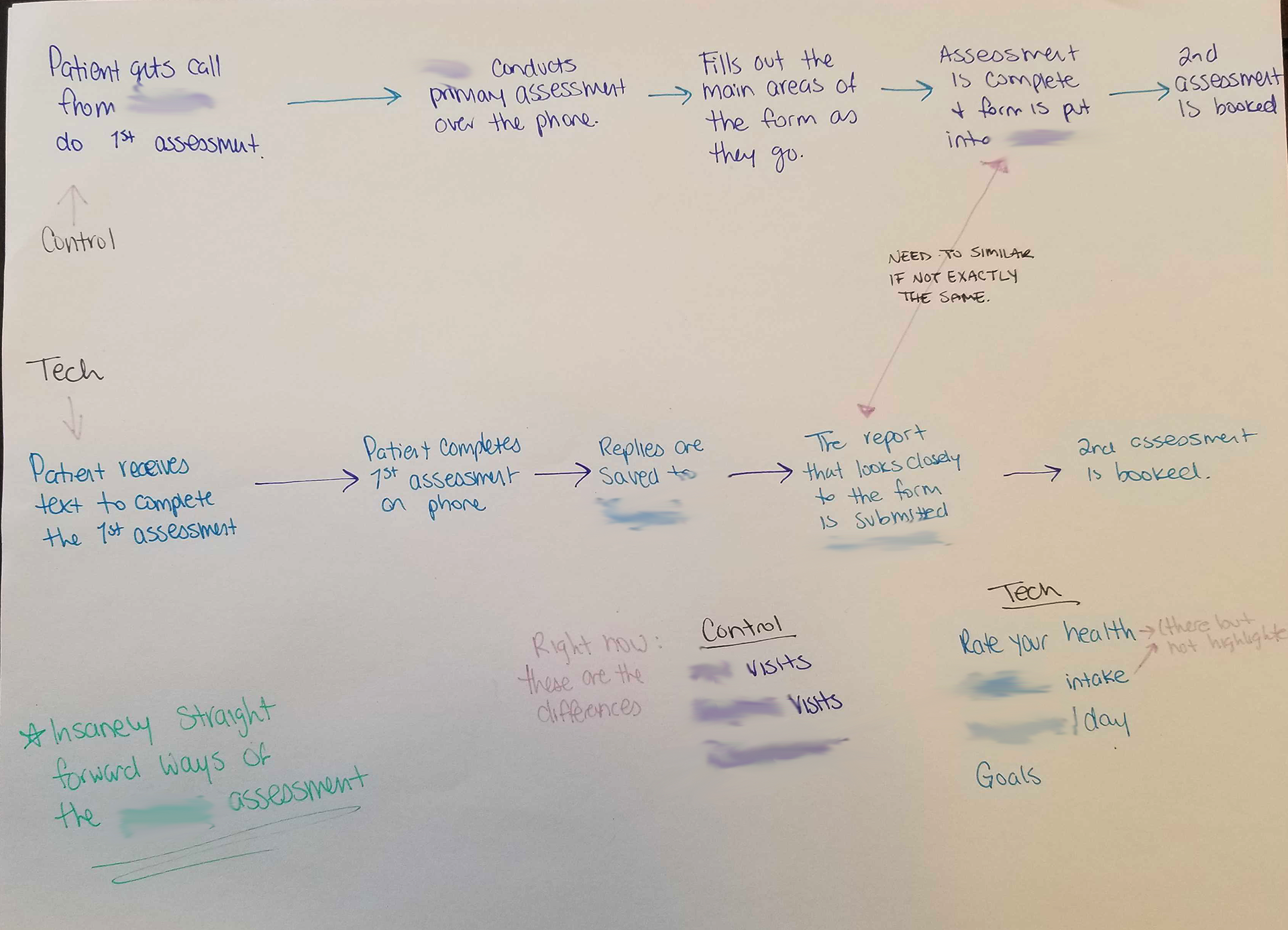 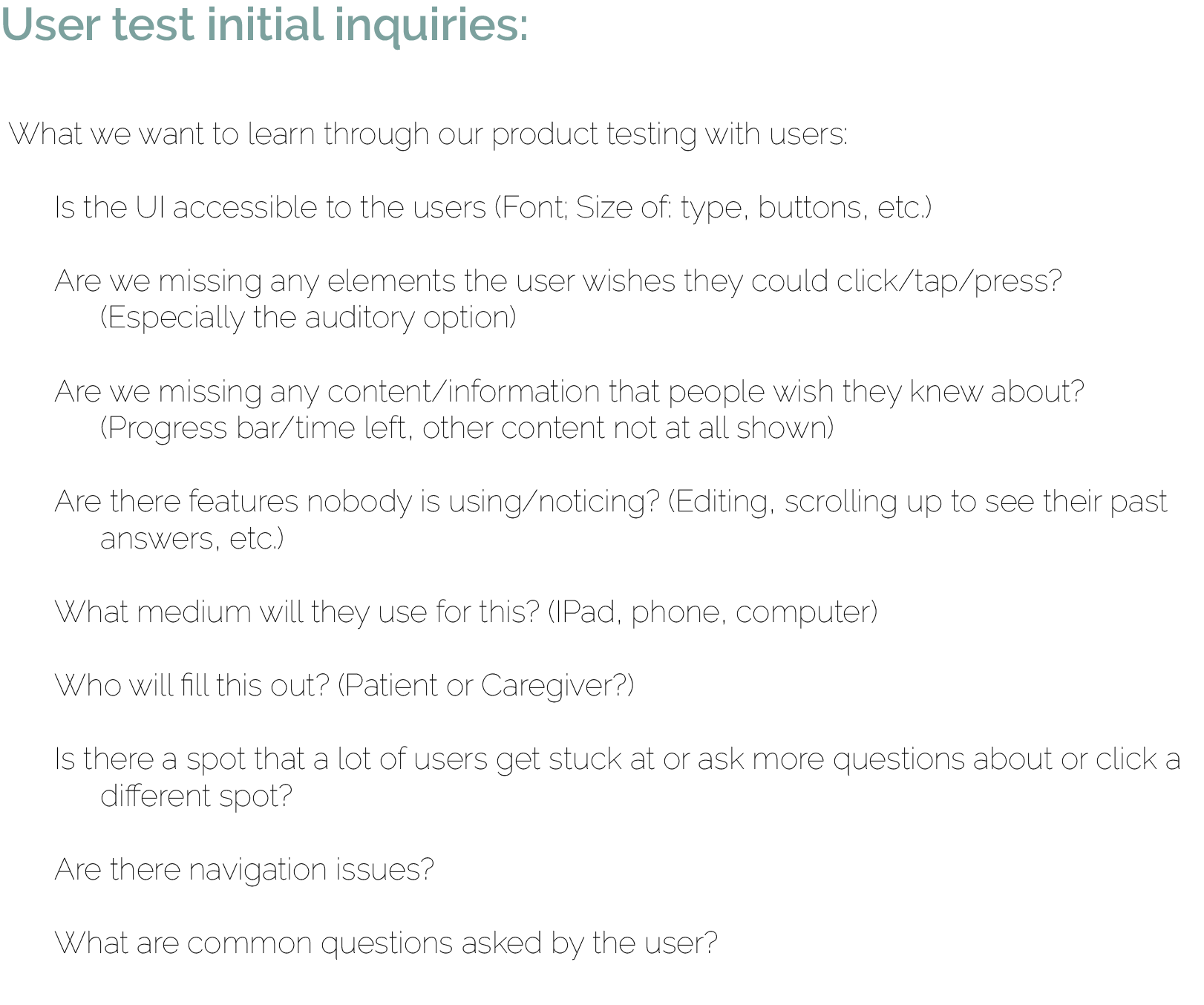 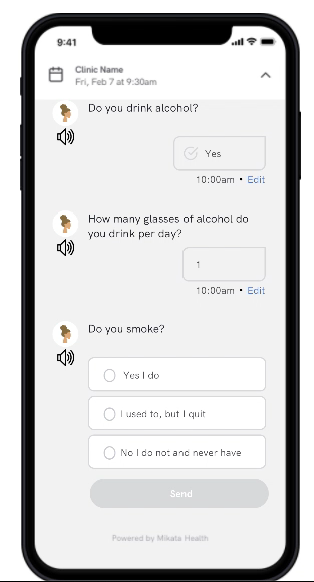 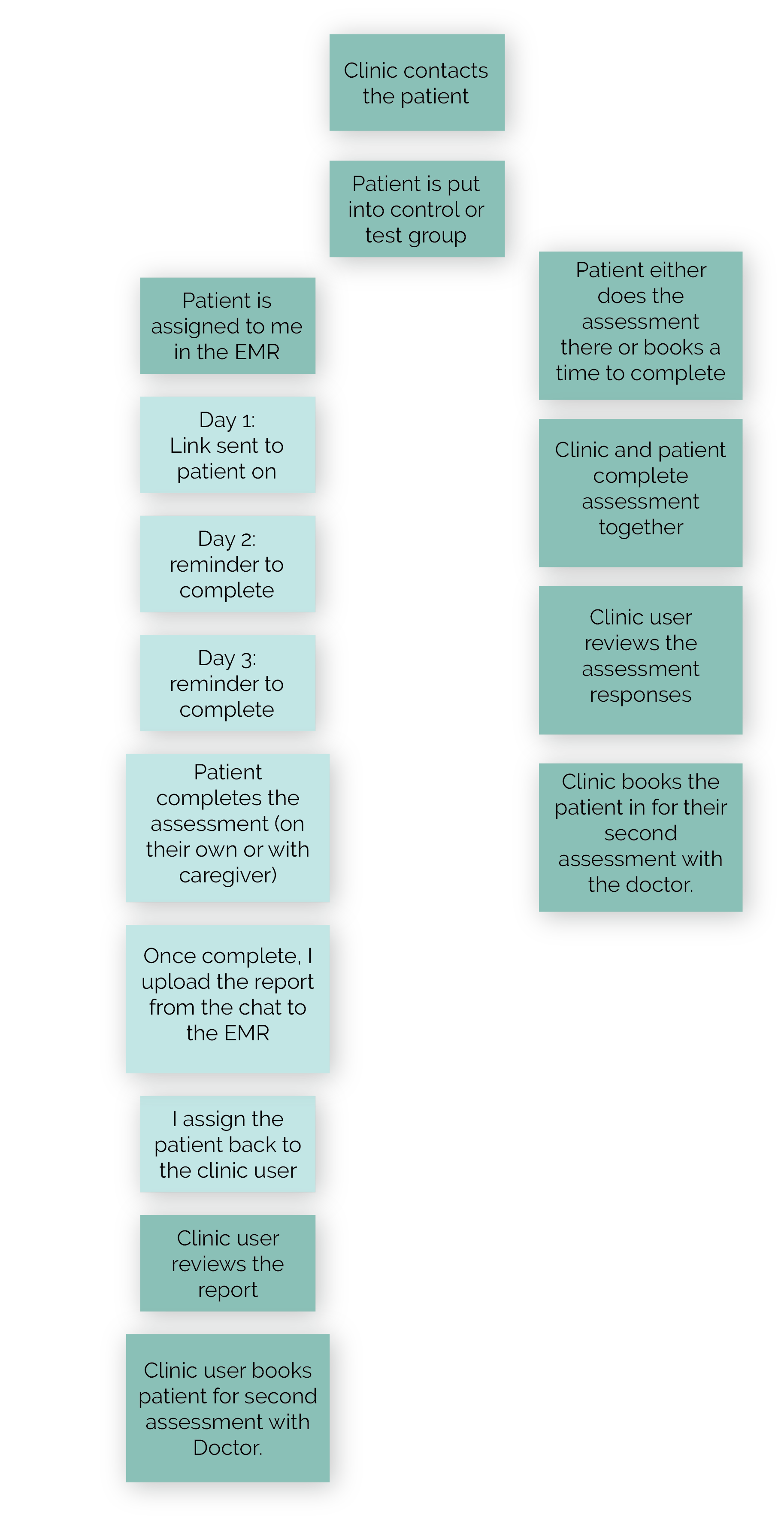 **Due to confidentiality, the specific details of this project are not fully shown or described.
This was one of the larger projects I was lucky enough to start and finish. It was a great project that did not go as expected and had some roadblocks in between, but overall was a published success!
Research
We were approached by a pair of doctors that wanted to see if using technology would help the flow of a current assessment that today takes up so much of their staff’s time. We talked with them to get a clear understanding of the problem and all that the assessment is composed of. We realized that the way people are doing the assessment is not efficient and we can help them out tremendously!

We chatted with the doctors, nurses, and current caretakers to understand the main information they need to gather from this chat in order to make it successful and what they might like and don’t like about the current process. We wanted to know if there is anything they wish they could have in today’s workflow to make their lives easier, and in taking these results, we had a great idea on what is needed and what we could possibly bring to the table to make their workflow a lot more efficient and still just as successful by introducing the use of technology.
Script
We received the current assessment and adjusted to be a chat by making it more conversational and less Q&A. We also took the script the nurses use when introducing themselves before the assessment so we can keep the conversation as identical as possible to the original assessment.
This script was changed many times… the different iterations of the chat included the very initial content which we took the doctors. Once the doctors took a look, adjustments were made to make sure we have all the information they look for when assessing a patient. We then took it to the nurses who currently do the assessment in person, and they adjusted it to make it sound more natural and less formal.
Once I made those adjustments, we threw it into our existing chat bot and created a prototype we could test on users.
Prototype and user testing
We had our working prototype that we could share to individuals to get their ideas.
Initially, we did it in person and we timed the individual doing the chat, and noted where they might have had issues or questions on how to move forward. We tested it on a few individuals initially, and these people included:

● Seniors we knew
● The team we work with
● And team members at the clinic we were working with
Focus Group
We made a focus group that included one doctor and the members that do the assessment and brought them through the script as a group and took feedback on initial ideas and thoughts. They all had great ideas and phenomenal feedback. We had a script that we were to follow, but in the group, we noticed that the conversation between all the individuals were so much better and natural when we let them just have their ideas and ramble off whatever was on their mind.
Completing study
The changes that were made to the chat were mostly about slowing down the speed of the messages; the order of some of the questions to make the conversation sound more like the original phone call completed now; and of course the one or two typos that come with many people looking at something you thought you scanned thoroughly. Once we made adjustments after the testing, we were ready to throw it out to the public!
The study had control (regular phone call assessment) and test subjects (the technology group using our chat for the assessment). About a week into the study, we realized that sending through SMS only was something that was limiting the people able to complete the assessment in the technology group, as they did not have a working smartphone. Because of this, we decided to adjust the medium to SMS and Email. Once we added this form of delivery, this allowed for those with no smartphone to still complete the assessment by technology.
Data collected
Through the entirety of the study, we recorded the time taken for each control and test user to complete the assessment; who completed the assessment (patient or caregiver); and what medium the assessment was completed in (SMS, Email, Phone with assessor).
Main takeaway:
This project was full of different research, design and user testing techniques, but I think the main takeaways from this project are: that it is okay to backtrack and adjust your study when you see early on that you may have created an unfair study; and that when you are creating and designing something for a specific population, you really need to dive into that user to fully understand what they need, and how they might use a product.

Library Display
↑Back to Top